with a focus on it's distinctive characteristics: short and tall body, architectural lines, graceful movement and intense character. 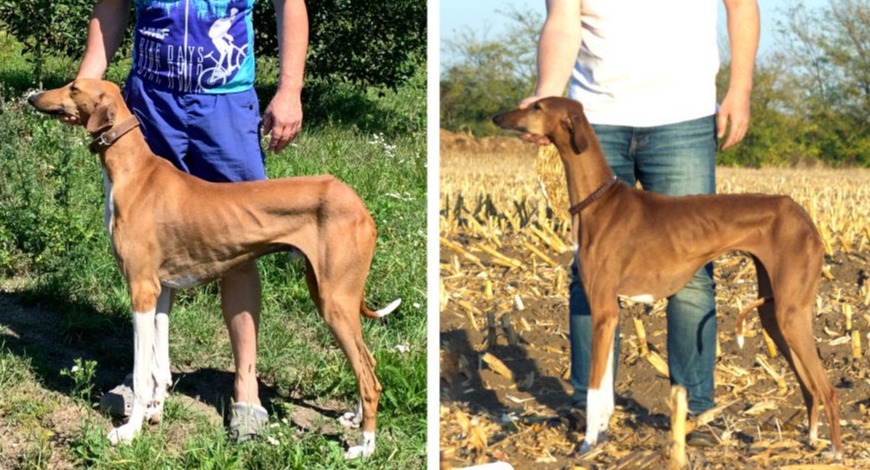 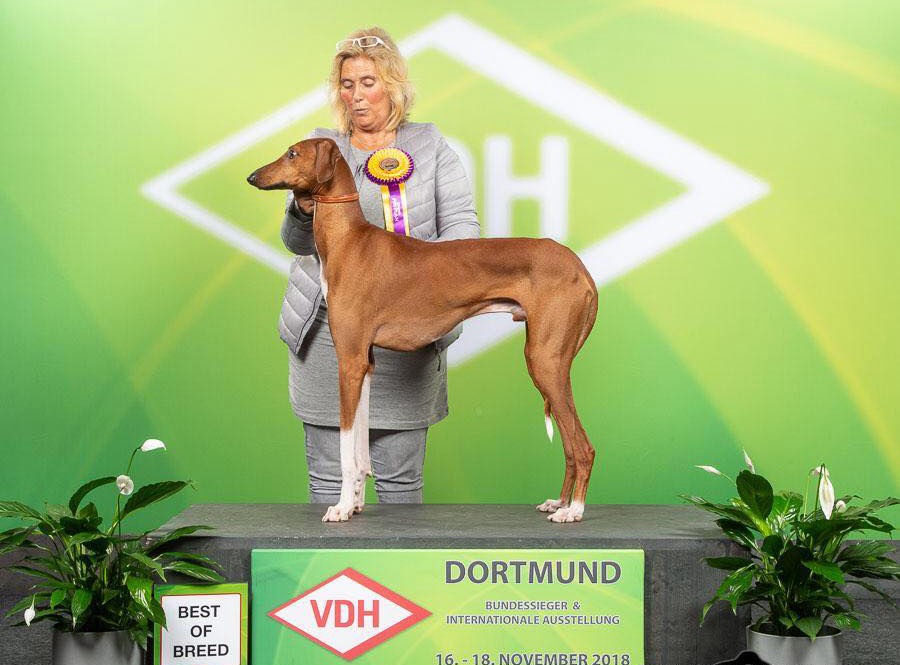 At only 13 months Insolens Elogium, owned by Petra Debus, got BOB at Bundessieger in Dortmund, the biggest show in Germany 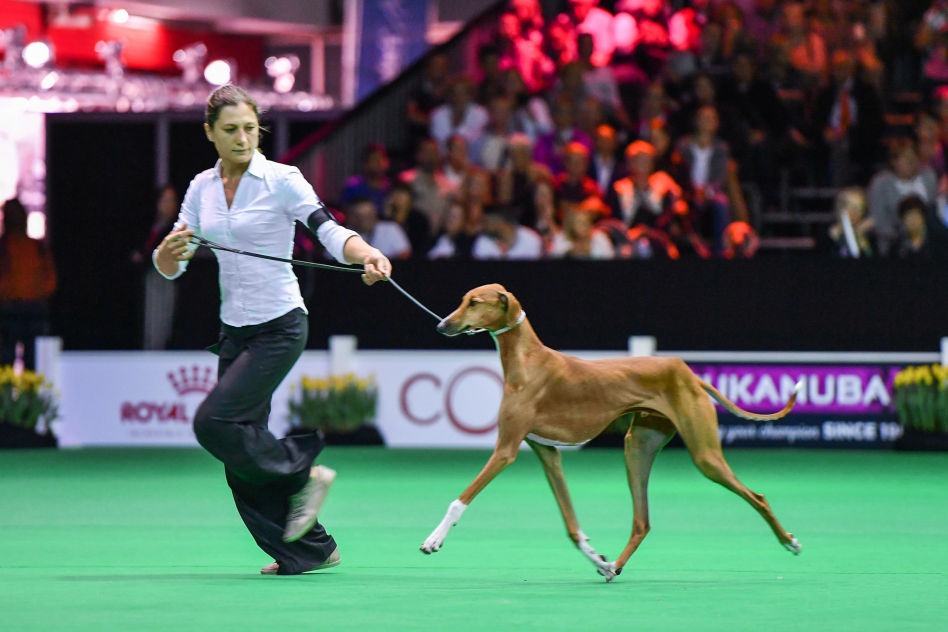 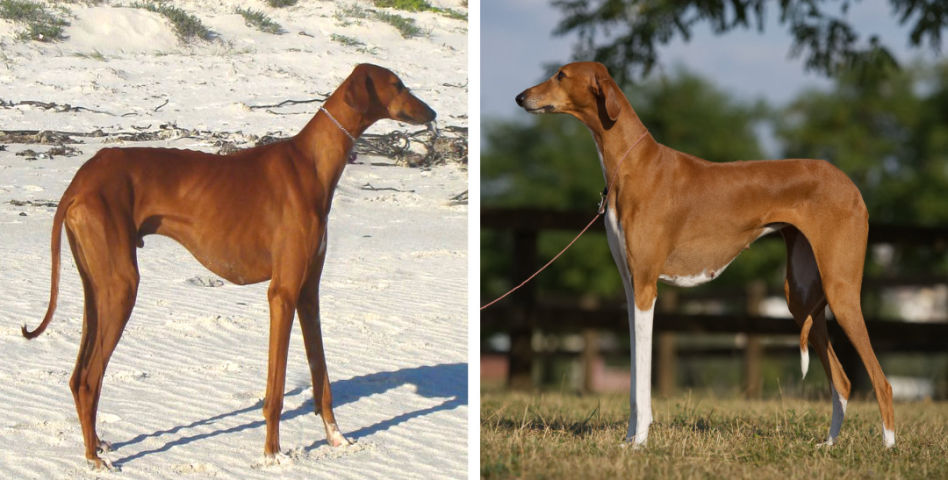 Mischa is coming to Romania 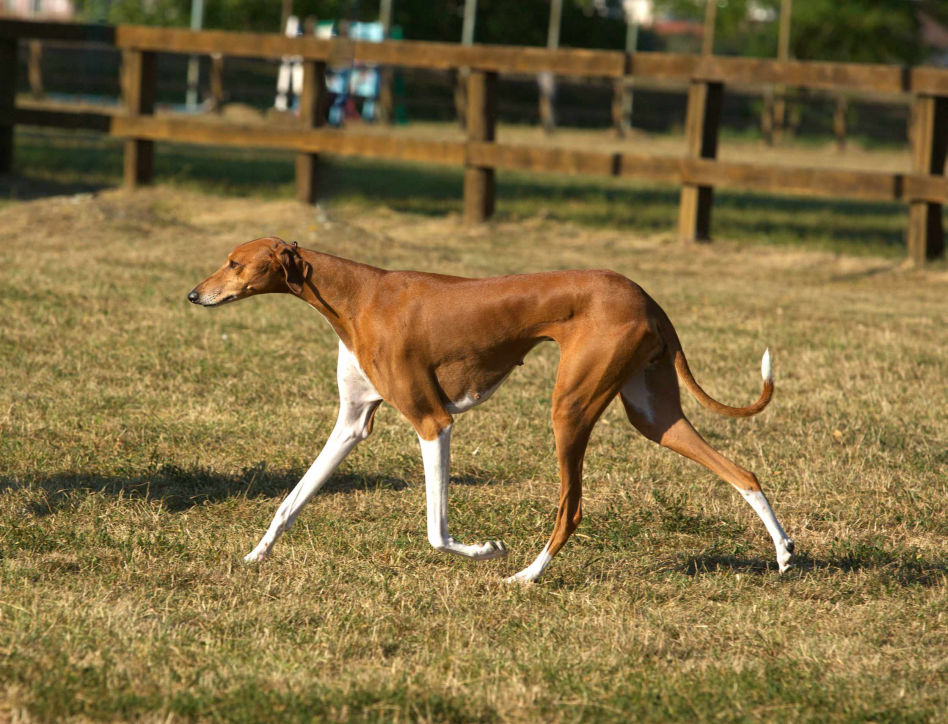 Arabica Atletico for Insolens, bred in Poland by Jarek Grunt out of our Insolens China and JWW'08 Aulad al Sahra's L'Agadez, is coming to us.

Best in Show in Poland 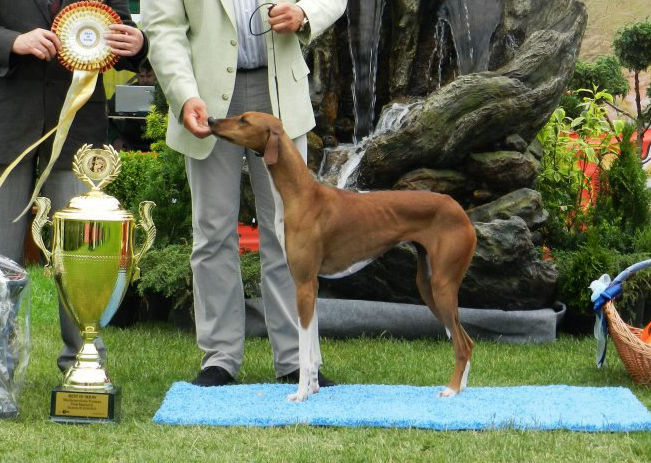 PL Ch. Insolens China, owned by Jarek Grunt, becomes Best in Show in Szczecin, one of the biggest all-breed shows in Poland 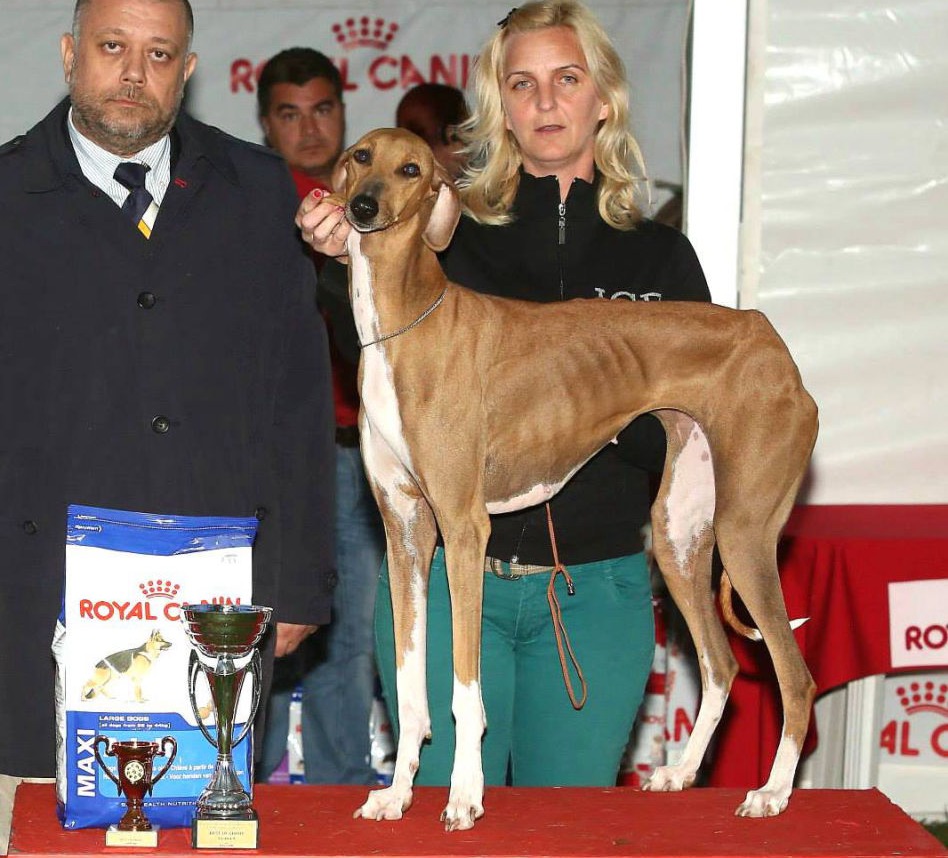 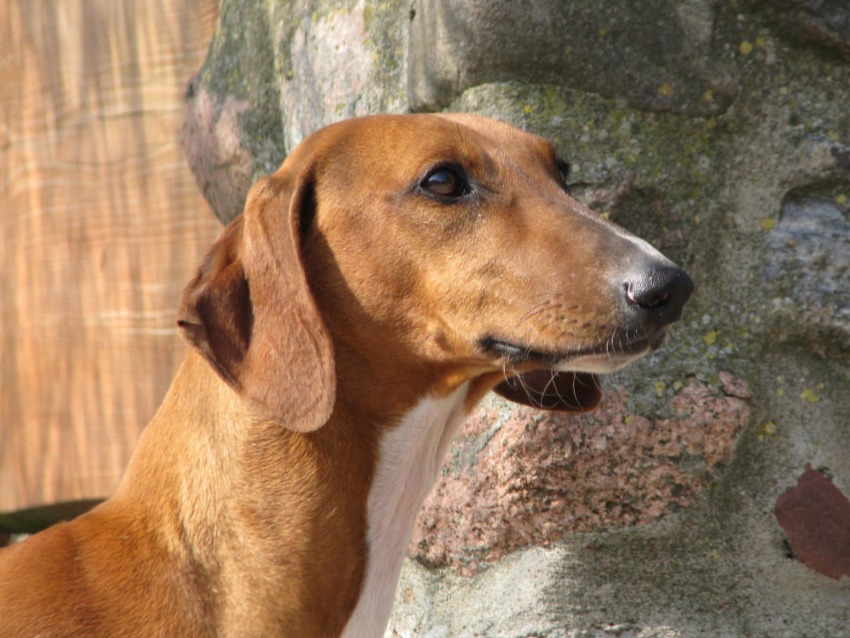 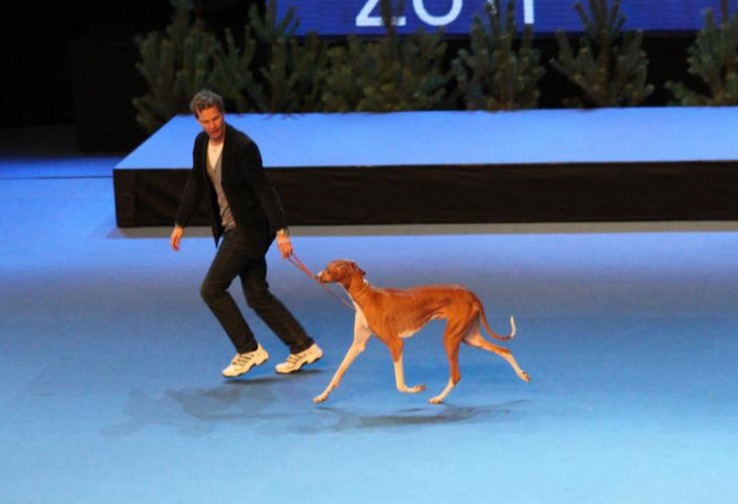 In our second litter were only two puppies but both very successful: EU. JCh'10 Insolens Burkina and Nord.Ch, Multi Ch. Insolens Bamako (photo), owned by Esa Sivusal from Finland, who later became Helsinki Winner twice, in 2010 & 2011. 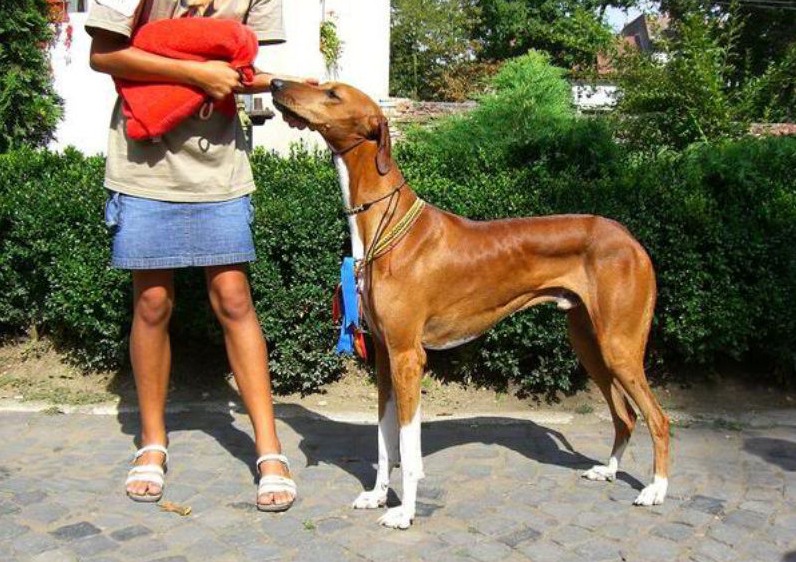 This was the first litter of RO JCh Aulad al Sahra's O'Alouan x R JCh, BWNL'08 Anella de Garde Epee - Aziki (photo), Aylal, Afer, Aksim & Africa were born that time. Unfortunately, despite their obvious qualities none of them was shown more than twice by their owners.

Alouan is coming to Romania 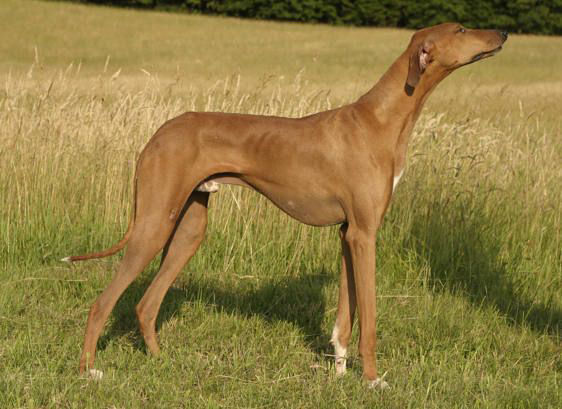 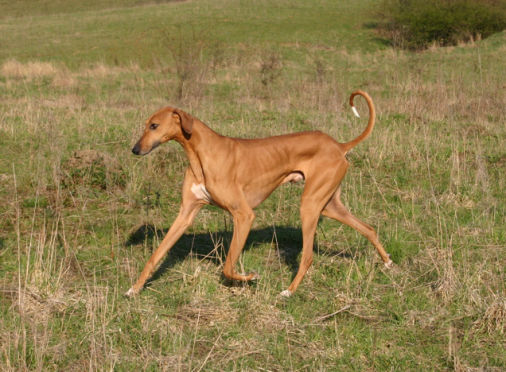 After showing and later breeding English Cocker Spaniels for ten years, in 1997 my attention was drawn to an unearthly, elegant dog, winning Best in Show in Budapest. It was Cid kel Dahoussahaq, bred and successfully showed by Monika Kessler from Switzerland. Five years later I got my own Azawakh from my good friend, the late chilean/ spanish all-rounder Norman Huidobro Corbett. MultiCh. ICh, EuJW Huilaco's Jehanarh Khan, son of Cid's liter sister, was the first Azawakh in Romania. He was a classy dog but unfortunately we never managed to get puppies from him.

In 2003, at the World Dog Show in Dortmund, I was fascinated by the two times world winner Aulad al Sahra's U'Tenere, which I still regard the best Azawakh of all time. Anne and Uli Hochgesand were kind enough to promise me a puppy. Setting high standards from the very beginning, I couldn't miss the other great name of the breed: de Garde-Epee. I am still grateful to Corine Lindquist for giving us in 2005 Annela, one of the most successful integration of new african-bred specimens into the older, already well established and homogenous french-yougoslavian population. It was then that our friend, Răzvan Șipos, has joined and brought Aulad al Sahra's O' Alouan from Germany and Annela de Garde-Epee from France and we started breeding Azawakhs in Romania under the Insolens affix. Meanwhile Răzvan has changed his life priorities and has left the breed. Hopefully he will get back sometime.